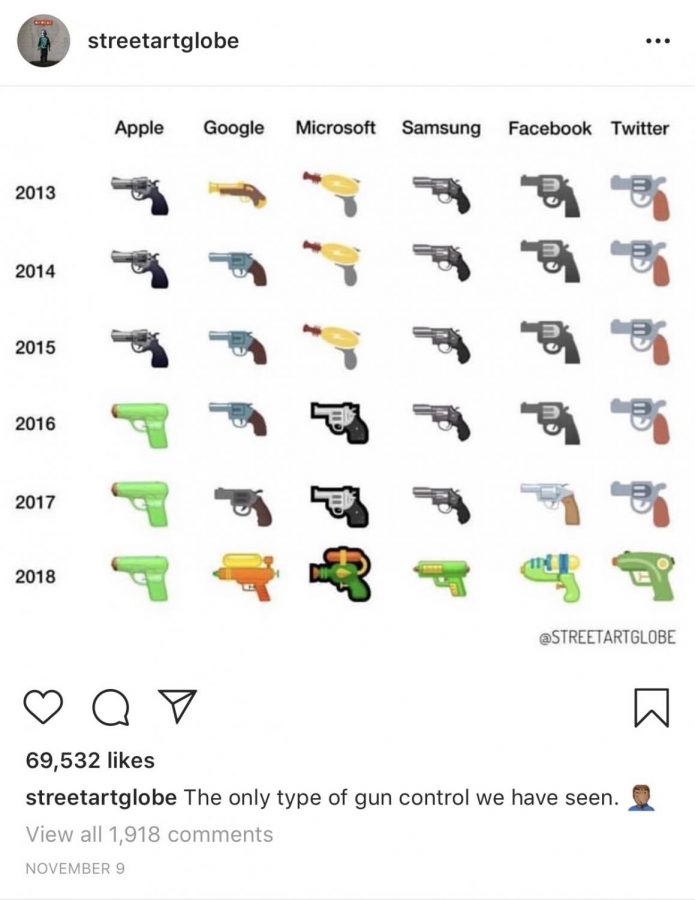 On social media people are sharing images like this to express their opinion/viewpoint.

As we mature and climb higher in our educational journeys, our views on school change. In elementary school, most children are very fond of school. It is a comfortable place for them to learn, play, and socialize. Once middle school begins, the positive outlook on school dwindles a bit. Classes become more challenging, friendship troubles arise, and pressure to excel begins to weigh teens down. This type of stress is healthy and has been common in teens for decades. Recently, there has been a new type of stress placed on school life that is less healthy, school violence. As more and more school-related shootings happen every year, our nation has begun to ask, “What are we doing wrong?” and “What can we do to change this?” The Lake Breeze Staff took it upon ourselves to find out the opinions on this topic from the South High community. In a survey sent out to the entire school, students and teachers were asked to voice their thoughts on multiple school violence related topics, and it turns out, the Redwings had a lot to say.

While the nation works to address this problem, many people have wondered, “Should we arm teachers?” Freshman Hunter Chvarak believes that “Yes. Teachers should be able to carry guns in school so that they can better protect us if a bad situation ever occurred. I do think that in order for this to happen though, teachers should have to go through special courses to be trained.” Many other students agreed with this idea. They believed that in order for a teacher to be armed, there should be a mandatory training for them to attend. On the opposing side, Librarian Ms. Grabow had some very strong feelings about teachers carrying guns. “If teachers ever carry guns I will quit.” Like Mrs. Grabow, other students saw no solution in teachers carrying guns and many thought that it would actually lead to more issues.

Although shootings are a concerning topic in society right now, 86% of students that responded to the survey say that they feel safe at our school. When elaborating on why she feels safe at our school, Sophomore Emily Vu gives credit to our school liaison officers. “We have great officers at South who keep us safe and I really feel like I can trust them,” Vu stated. While our officers do a great job of keeping us safe, Junior Camila Trimberger makes a point that there were protocols set in place to keep other schools that fell victim to school shooting safe as well. She stated that “While I feel safe as there’s relatively little physical violence that I notice, many students in schools that have been affected by shootings have said similar things, as they never expected it to be their school.” South has never had a first-hand experience with a school shooting, but last year after the Florida shooting, there were many threats to our school and other schools around the nation that were known as “copycat’ shooting threats. Our school and district administrators take proper action to deal with these threats, in an effort to prevent tragedy.

Guns are often held responsible in shootings for the death of the innocent victims. Many South students had their own ideas on the possible restriction of guns. Senior Caspian Bink is on the fence about this topic and believes that “That is a two-way street, or rather, it’s more like a seesaw. The more freedom you have, the more problems there can be, the less freedom, the more security you have.” Bink sees both sides of restriction and doesn’t have a biased point of view. Like Bink, many students aren’t certain about what needs to be done to resolve this dilemma. While many students are on the fence, some students are also completely biased on the topic. Some students biases lean toward the side of needing more restrictions. Freshman Rylee Brotz says that “Yes we need more restrictions because today anybody can purchase a gun, and most use them for a bad cause.” On the polar opposite side of this opinion, Senior Nikolas Mersberger believes “Personally I feel like school shootings are always going to happen. Evil is part of our world and sometimes it can’t just be controlled by laws and regulations.”

Besides feelings of sympathy for victims and new safety measures, the South high community generally has not been impacted personally by school shootings. An exception to that statement though is English Teacher Mr. Goodale. Goodale was teaching at another school in Florida at the time of the shooting at Stoneman Douglas and that experience has made an impact on his life. “I was teaching in Florida when the mass school shooting occurred last year. This prompted our school districts to tighten security significantly and to run through intruder alerts very frequently. I was also fortunate enough to participate in some memorial activities that took place for the students and teachers that were lost,” Goodale recalled.

As people living in today’s society, we are all going to have different views on everything. Whether it’s a topic as serious as gun control, or a debate over whether Taylor Swift is a good musician, opinions in our country will always vary. It is important to keep in mind though that even if we don’t see eye to eye with one another on specific issues, it is our job to stick together and make the world a better place.