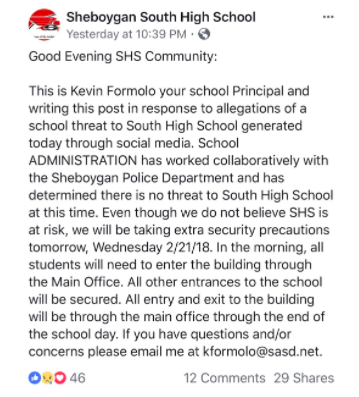 Around 11 AM on Wednesday, February 21st the Sheboygan Police posted an explanation as to what happened regarding the school shooting threats against South High.

In essence, a student refused to check into the commons and the security members at South went on to look for the student, creating rumors as to why all security members were needed. One student posted online believing it was a threat to the school, the post was later removed by South security, but the Sheboygan Scanner blew up the situation by posting this false information, creating widespread fear amongst the community.

After seeing these events unfold, we must thank the Sheboygan Police, and South High administration for their quick responses and hard work on protecting those in the building (even when there was no real threat). As a community, we must remember the words of advice given by the Sheboygan Police “having a website and Facebook page does not make you a journalist!”

On February 20th, at 8:49 PM the Sheboygan Scanner facebook and twitter account posted “[7:15] threats made about shooting at south high” shortly after, South High’s online community broke into pandemonium.

Barely over a week ago in Florida, a shooter walked into Stoneman Douglas High School and began firing at students, killing 17 people in all (14 students, 3 faculty members), becoming the third deadliest school shooting in America, and knocking Columbine out of the top 10. Ever since multiple school shooting threats have been appearing all over the country, unfortunately, Sheboygan South being one of them. Though this is not the first time a threat has been made, in 2016, Joshua Bagemehl was arrested for posting threats against South on Facebook, and is now serving time in prison.

But, back to Tuesday night…

The Sheboygan Scanner post was shared nearly 200 times and both parents and students began posting on social media their fears, and warnings for other students. People soon began arguing with each other online, challenging the validity of the threats, even entering debates on gun control in America.

“I was on the couch on Facebook, when I saw the post and I was really scared to come to school the next day (even though I’m here today) I tried to get the word out as much as possible,” says Senior Angela Yang, “nothing like this has ever happened before.”

“Everyone was freaking out,” adds sophomore Jacksen Wolff, “looking back, it was kind of foolish.”

Then at 9:36 PM, about 40 minutes after the original post, the Sheboygan Police Department posted online saying that the threats were fictitious, but many parents and students were still wary, vowing not to attend school on Wednesday. 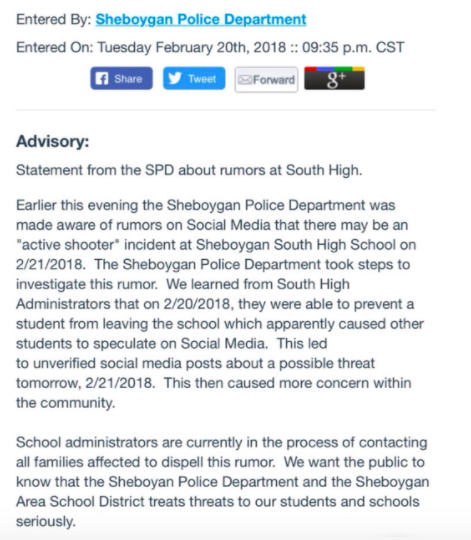 Then at 10:39 PM, an hour after the police report, principal Kevin Formolo wrote on South High’s Facebook page and called students saying “there is no threat… we will be taking extra security precautions tomorrow…”

Wednesday morning, as I approached the parking lot at 7:30 AM, it was a barren landscape, about 30 cars parked while students entered through the main office as asked by principal Formolo. Even with the threat dismissed, many students stayed home today by their parent’s request, and the hallways stand silent. As we sat in class, the environment felt a bit dystopian, yet safe.