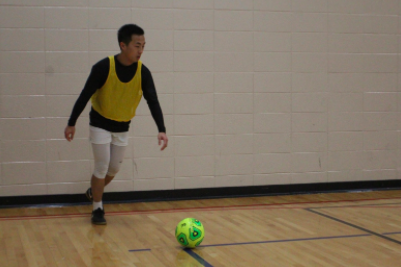 Steven Yang prepares to take the corner so that it may set up one of his teammates to score.

As the winter season begins, there are many sports that students participate in, and one of these sports is Indoor soccer. Though not a sport at Sheboygan South many students from South and North sign up for the indoor soccer league in Sheboygan Falls. As snow falls and it begins to become cold, outdoor soccer can no longer be played, so fellow South High athletes turn towards indoor soccer which is competitive, fun, and a good workout.

“The feeling of the ball by my feet is magical. Indoor soccer made me appreciate the intense training that I had gone through since I was a kid. The sport isn’t the easiest to play without being in shape. I play to enjoy my time with friends and play the sport that I love” This inspiring quote really helps show why so many people love this sport, and this would lead many to believe that more people should involve themselves in indoor soccer.

What was not mentioned is that people that do not even play soccer are interested in participating too. Senior Caleb Moua is interested in playing in the indoor league. Playing Football his entire high school career and never playing soccer.Caleb tells us he is interested because “Soccer is something new that I could not play during the fall season due to playing football, And indoor soccer teams are created by players so it is a good opportunity for me to play with my friends, and it is a good way to challenge myself.”

Another former soccer player, Senior Steven Yang is also taking part in indoor soccer.  Yang stated he was interested in playing indoor though he did not play Redwing Soccer. He said “I regret not trying out for Redwing soccer this year, therefore I am going to partake in indoor soccer”

There are many of people that dislike both types of soccer, indoor and outdoor. Most people do not like soccer because they have never tried soccer or that they have never played on a higher level with a team that knows how to play well.

Many people should try indoor soccer because it can open new doors to them, by doing indoor soccer one can meet many new people and make new friends while staying healthy and having fun.Indoor soccer must be great because people like Moua who have never played soccer are interested in it.