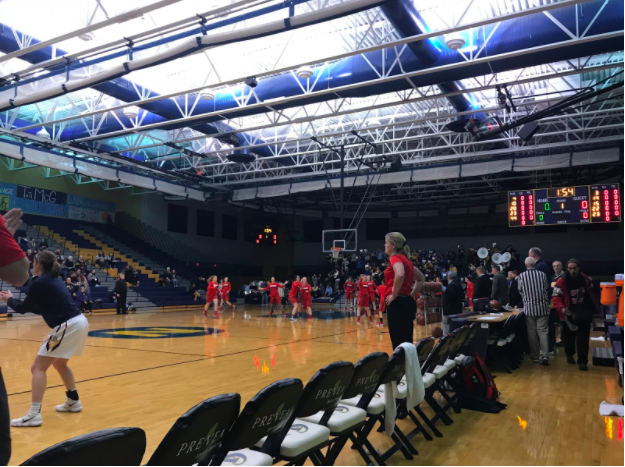 The girls prepare for the first varsity game of the night. The tensions rise as each team begin.

Each year the rival schools, North and South High, battle it out in every sport. From football to dance, track and cross country, and most recently basketball, the week of ‘North-South’ games is full of anticipation and excitement for students and players. As posters go up alerting students of the theme, talk goes around about what others are wearing, who’s jersey they are going to sport, or what they are doing after the game! This year’s theme was blackout, and every student came decked out.

“My favorite part of the games every year is dressing up to support our team, looking up at the student section filled with kids wearing the themes makes me proud to go to South High!” said senior Justice Reece. Students can often be found running to the nearest Goodwill or their best friends closest to find the perfect looks for the night. Showing up with the most school spirit is something most students take a lot of pride in.

Unfortunately South didn’t get the ‘W’ this year, but that only leaves room for bettering each player and the team as a whole. When asked where he hopes the team will be next year, Junior Antione Jones answered,

“I really hope we have strong team chemistry so we can move the ball around with better communication. I also hope we get some new players to throw into the mix to bring in some fresh talent to the team.”

The dance team is also a highly anticipated performance from each school, with north giving their show this past weekend, our very own varsity team is waiting for their chance to stun the crowd,

“I’m really excited to perform at such a highly attended game! This will be my first time getting to dance at a North vs South basketball game!” explained sophomore Chloe Renzelmann.

Freshman Halle Boldt had her first North/South experience out on the court.

“It’s a different vibe when you’re playing. I get nervous for these games, everybody just really wants to go out there and play their best in front of the city.” Most students will never know the pressure of playing the game with all of your friends and rivals watching your every move.

With the last North-South game of this school year being in February, South’s Student Council is already in the works of creating the posters seen around the field house. Clever nicknames and rhymes typically go on these posters and players love to get photo-ops with their giant name on the walls. Posters take a few hours to complete, so the students dedicate a lot of time each and every week to make these the best they can for their players!

As Senior Philip Pethan thinks about the last North-South game he says,

“It’ll be a bittersweet moment. On one hand I’ll be experiencing one of the last anticipated nights of high school, but on the other hand, I’ll be surrounded by my peers for one last hurrah as a Redwing!”